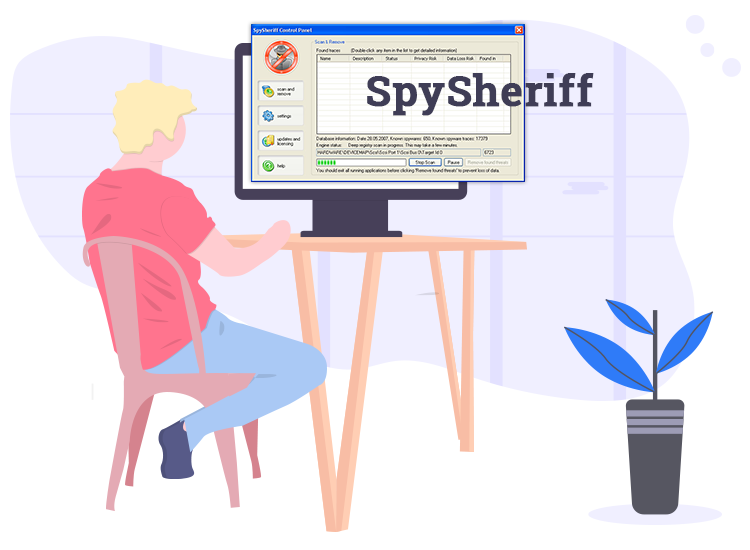 The SpySheriff scareware is a rogue program, one of the most devastating and widely circulated malicious threats on the Internet.

Rogue security software is a kind of Internet fraud, a malicious program that displays a fictitious Windows warning stating that someone’s machine is infected with a computer virus, and mislead the user’s to install or purchase fake malware removal tool in the belief that they are purchasing genuine antivirus software.

One such example of rogue antiviruses is SpySheriff. It disguises itself as a genuine spyware removal tool and tries to deceive the targeted users with bogus security alerts, scaring them into buying the product. In addition to this, it prompts the victims to pay for the removal of malicious threats that never existed in their computer systems.

Rogue programs like SpySheriff are not only using Windows vulnerabilities but also using advanced social engineering (fraud) techniques to baffle the inbuilt security firewall of the Windows operating system and further install itself onto the targeted computers.

It’s important to remember that by buying the “Rogue anti-spyware SpySheriff program or utility software” you will be submitting your personal info to unscrupulous persons and may also end up being a victim of identity fraud or data theft.

What is the Purpose of the SpySheriff Program?

Rogue security programs like SpySheriff are intrusive and have a sole purpose – to take your money. They often tend to rely on the following things:

Such rogue anti-spyware software often replicates the look and brand name of the genuine security software, including Microsoft software. Therefore, it gets extremely difficult to discriminate them from legitimate ones.

Rogue software like SpySheriff are usually a form of scareware (software that uses social engineering tactics to cause anxiety and shock) that manipulates users through fear and targets them by sending a lot of misleading messages from their fake software or websites.

These malicious programs can neither scan nor clean computers, they are actually designed to persuade users that their machines are at risk and scare them into purchasing fake computer security software

These Rogue program also targets Windows firewall and security applications to stay concealed from the regular antivirus program and user.